We arrived at Papamoa Beach on a late autumn afternoon looking for a place to stay overnight, and the Top 10 Holiday Resort was the first place we found. It was directly alongside the beach, so we checked in, asking for a site overlooking the beach. 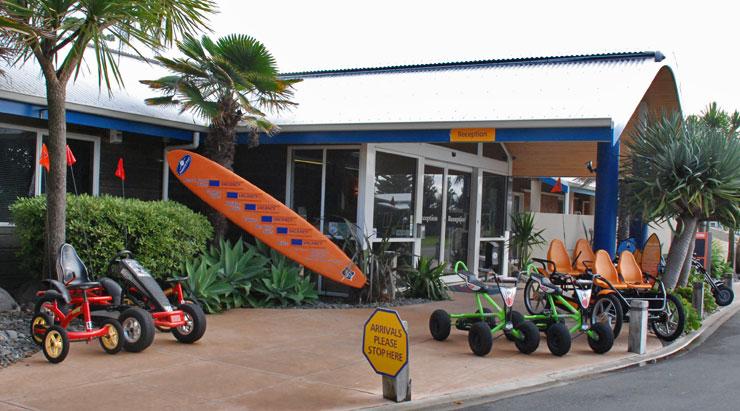 We got ourselves set up, made some dinner, and settled in for the night. The location was great, and we soon found the facilities to be excellent as well. They were just a short walk from where we were parked. Plugged into 230v power, I spent the evening catching up on preparing all the pictures I'd taken over the past couple of days.

It rained heavily overnight, and the wet weather looked to have set in for the next day as well. With really good, 5 minute showers to temp us, we decided to stay for another night before heading down the coast towards Whakatane.

Papamoa Beach was heavily in the news when the Rena cargo ship ran aground on the Astrolab reef just of the coast from where we were camped. Major oil spills had washed up on the beach at the time, but there was no sign of that now. The white sand beach was littered with seaweed, courtesy of the stormy weather overnight, but the sand itself gave no hint of what had happened.

The only evidence of that event was a small tanker that drove up and down the beach at regular intervals, which we were later advised, was involved in a project to wash tiny plastic beads from the sand, which had washed ashore from one of the containers on the Rena.

Later in the day we chatted to a Scottish couple who had just come over from Edinburgh, and were touring around in a small van. They had come from wild we weather in the UK, to a dose of similar weather here. But they were really enjoying their journey, driving up from Wellington to Rotorua, and now at Papamoa Beach. They especially loved the hot pools in Rotorua, so we thought we might check that out for ourselves.

On the last day, we discovered that they also have a very comfortable library and Internet room. If we'd noticed earlier, Shuping would have borrowed some fresh reading material.

There is a large shopping centre just a short walk from the camp that includes most of the large department stores should you need to buy anything. There is also a very nice beachside restaurant should you feel like dining out.

We got up early on the last morning to catch the sunrise, which lit up almost the entire sky before the sun surfaced on the horizon. Almost impossible to do justice to with a photograph, but that never stops me from trying. 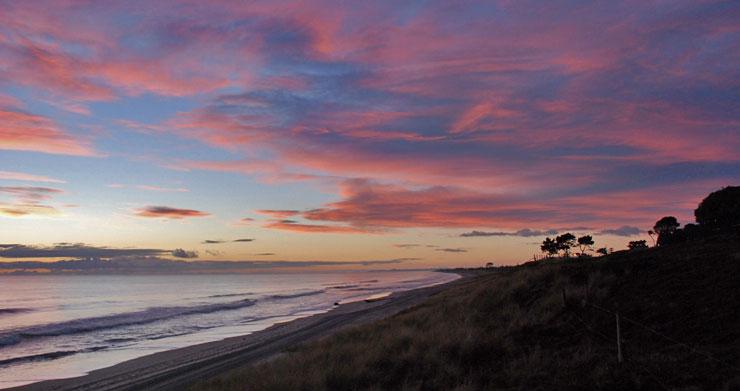 Overall we very much enjoyed our stay at Papamoa Beach. The resort was clean and well managed, and all the facilities had been thoughtfully laid out.